One of the things about being responsible for animals is that when you screw up and an animal dies- there’s nothing like the guilt and sadness of it.

The picture is of a beagle named Shilo.  We got him last fall.  He was in a humane society foster home, looking for a permanent home.  As a child I had a beagle and have a certain fondness for them and Tom, my husband, wanted a small house dog.  We fell in love with Shilo and brought him home.  We continued to love him, especially my husband.  We took him on trips and kept him in the house when we were at work or asleep at night so he’d stay warm.  He loved curling up on the blanket  on the coach and when we were outside he loved to run around our property howling at whatever he felt like.  The back fence had been destroyed, and he had gotten out up there into a quiet residential neighborhood, but we had fixed that fence.

Anyway this morning I let him out to go potty before I went to work.  After 15 minutes I was dressed and ready to go, but I called and called for Shilo to come in the house and he didn’t come.  I had to get to work and couldn’t get dirty traipsing through the woods trying to find him  so I figured I’d leave him out for the day.  I thought he might get cold, but he could curl up in the doghouse to keep warm.  I thought he might be able to get out the upper fence but that the worst that would happen is the pound would be called and he had ID so I didn’t think it would be a big deal.

I didn’t think Shilo could get out our front fence and the thought that that might happen today didn’t even cross my mind.  I feel totally sick about this.  The only things that I can hope for now is that he died a relatively painless death and that my husband will forgive me. 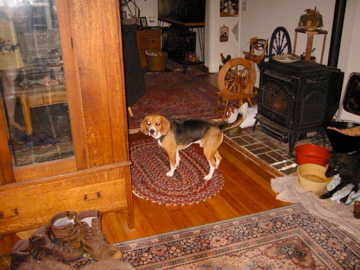