As I mentioned before, Tom picked up a bunch of supplies for the cocktails.

One of these is Fernet-Branca, something I have never heard of before.  But I will say the bottle is gorgeous.

So I used 2 dashes of this for the first time January 28 in the cocktail Hanky Panky.  This drink was created by the second-ever female bartender at The Savoy hotel’s American Bar in London.  It has equal parts gin and sweet Vermouth and an orange twist.  It was OK.  Nothing amazing for me though. 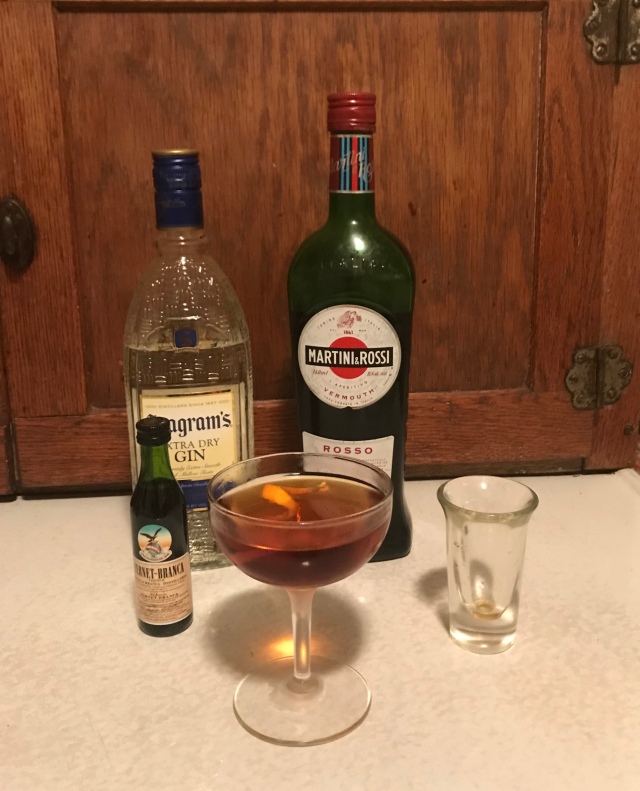 That evening I also made Hot Stuffed Tomatoes.   Tom bought me some heirloom tomatoes. I put a mixture of cream and goat cheese on the bottoms. 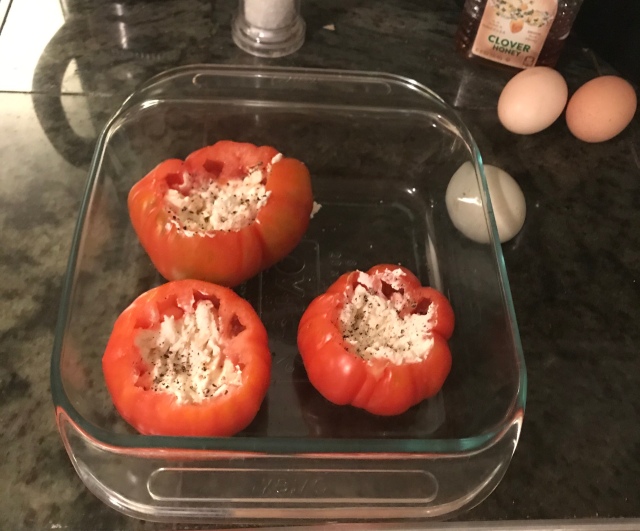 We couldn’t find quail eggs locally so used our small chicken eggs.  Here they are all cooked.  They were OK, again nothing amazing, but certainly different than our usual eating. 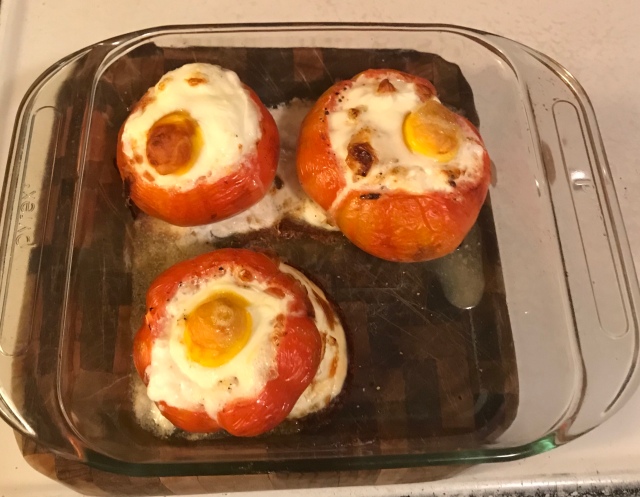 The next evening I made myself a Marigold cocktail.  This one has equal parts gin and Cocchi Americano mixed with 2 dashes of Fernet-Branca and two dashes of Lavender bitters with an orange twist.  I could not find Cocchi Americano but got Cocchi Vermouth di Torino.  The description as similar, but I am not sure they have the same flavor.  This may be the first time I have used my lavender bitters.  This is a Lady Edith inspired drink.  To me it was OK. 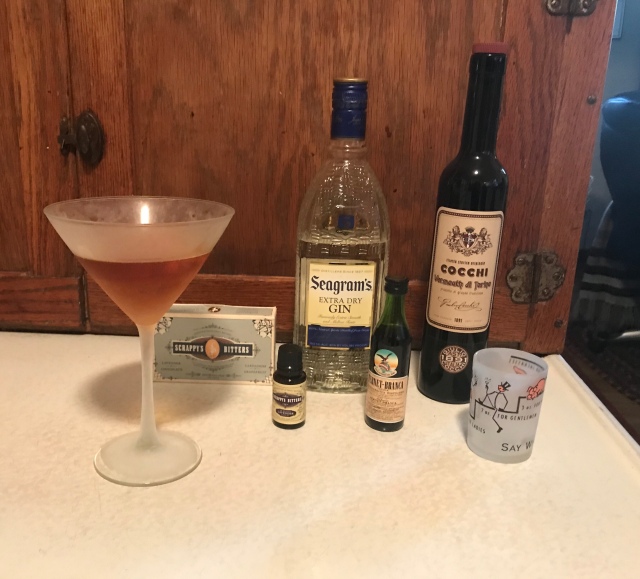 For dinner I made Trout in Port Wine Sauce.  This was really easy to make and yummy to eat.  Tom needs to go fishing again this year and get us some fresh trout.  I had a leftover stuffed tomato with it.

The next evening I made a Bosom Caresser cocktail.  I am loving some of the names of these cocktails.  This one has brandy, cream, Curaçao, raspberry syrup, and an egg yolk with an orange twist.  It was pretty before it was shaken up. 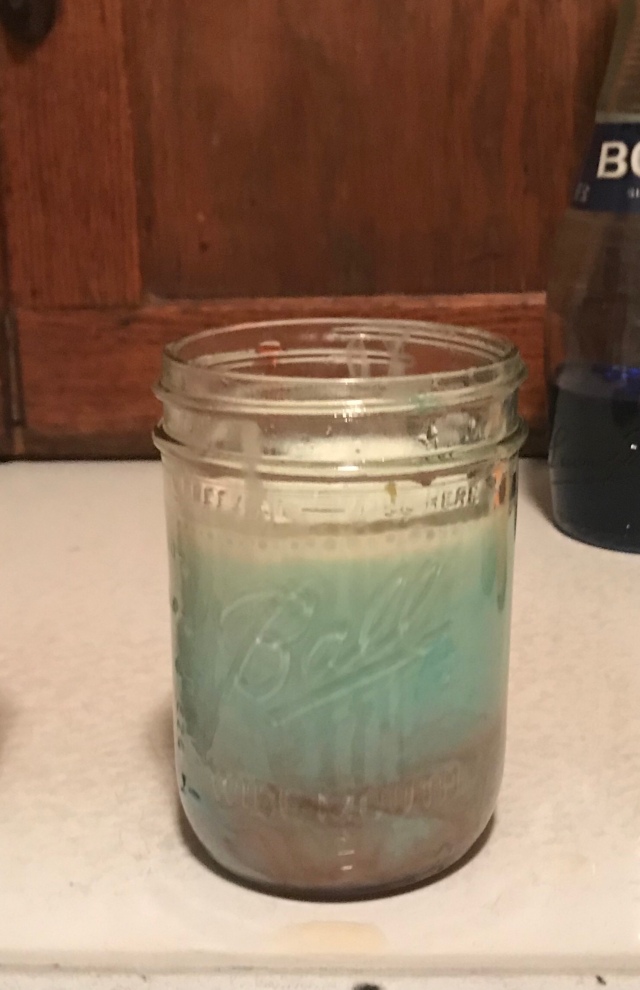 This one tasted like creamy cough syrup to me. 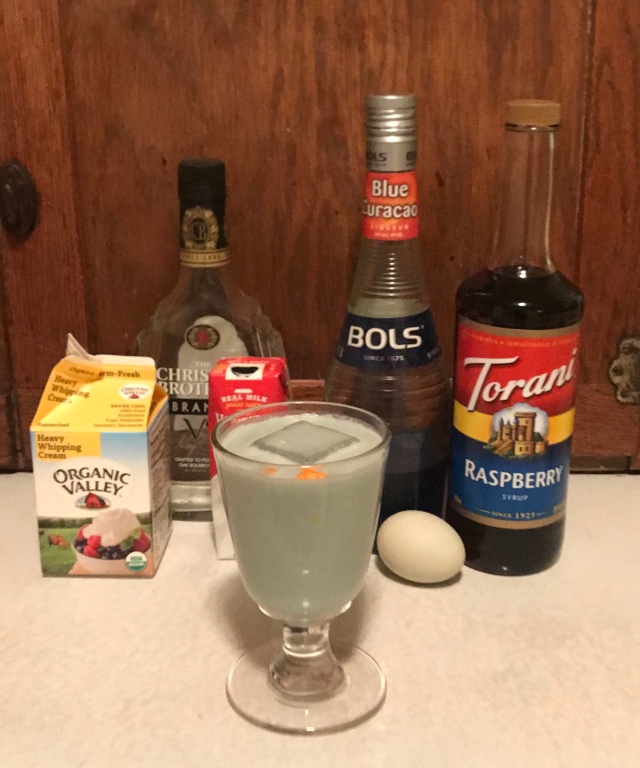 For dinner I made myself Vegetable Curry (Tom was not interested).  I dug around in our garden that morning and found some parsnips and turnips out there still.  I used some of our frozen green beans as well with purchased apples, cucumber, onions, and carrots.  This dish was great and also great the next day as a leftover.  I will definitely be making this again. 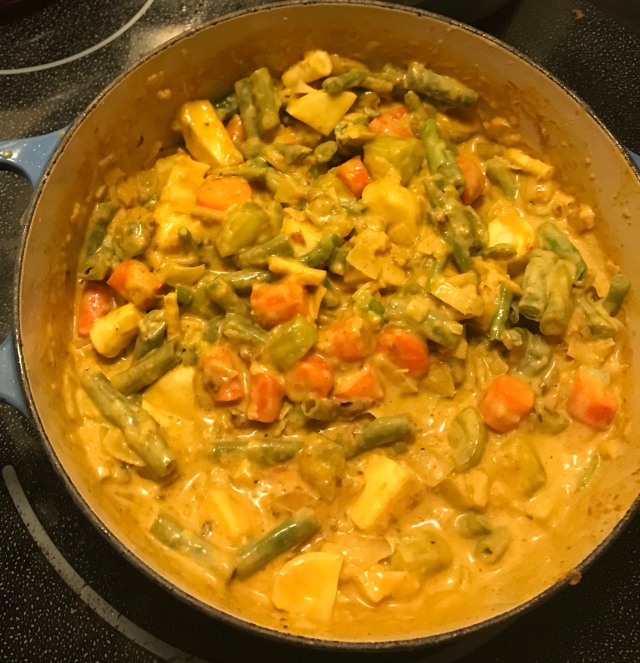 On Sunday I made a Wild Rose cocktail.  This one is designed for Lady Rose and is the only one in the book with tequila.  It is mixed with maraschino liqueur, Angostura bitters, pineapple chunks and sparkling wine with an orange twist rose.  Thankfully I had some leftover pineapple from our failed pepperoni and pineapple pizza we tried to make for William the evening before.  Plus Tom was making chili for the Super Bowl so I thought a tequila based cocktail would be appropriate.  This was good.  I do prefer my favorite margarita recipe though.

On Monday I had a Japanese Cocktail.  This is from an 1887 edition of Jerry Thomas’ The Bar-Tenders Guide.  This is Cognac, orgeat syrup and Angostura’s bitters with a lemon twist.  It is described as a version of an Old Fashioned but to me it was nothing like one.  There is nothing Japanese about it.  But I really liked this.  It turns out that orgeat syrup is almond syrup.  I thought it blended great with the Cognac.  This is probably my favorite Downton cocktail so far.

For dinner I made Beef Stew with Dumplings.  Unfortunately my daytime chores took too long, and the stew was supposed to cook for 5 hours.  So I ended up pulling out the Instant Pot to cook it much more quickly.  This was my first downstairs recipe I tried in the cookbook.  Here is the stew cooking in the Pot with the dumplings ready to go in.

This stew has lardons (bacon bits) in it as well as onion, Worcestershire sauce, black treacle, whole cloves,  bay leaves, and beer in it. The dumplings were made with suet as well as fresh rosemary (both from our farm).  The meat was from our farm as well.  I chose to add some carrots and celery to it.  Here it is all served up.

This was the best beef stew I have ever had.  The dumplings were a little weird, maybe because they were pressure cooked.  Tom did not like the flavors so much so I guess I will just have to make it for myself in the future.

Today I made the Morning Coat cocktail.  This one was designed for Tom Branson and includes Irish Whiskey.  I still had some left from my Advent calendar.  The cocktail also has Cocchi Vermouth, maraschino liqueur, absinthe, and orange bitters with a cherry and lemon twist. For me this was strongly flavored and not a favorite.  I did find that I have a bar spoon and a cocktail strainer so have started using them. 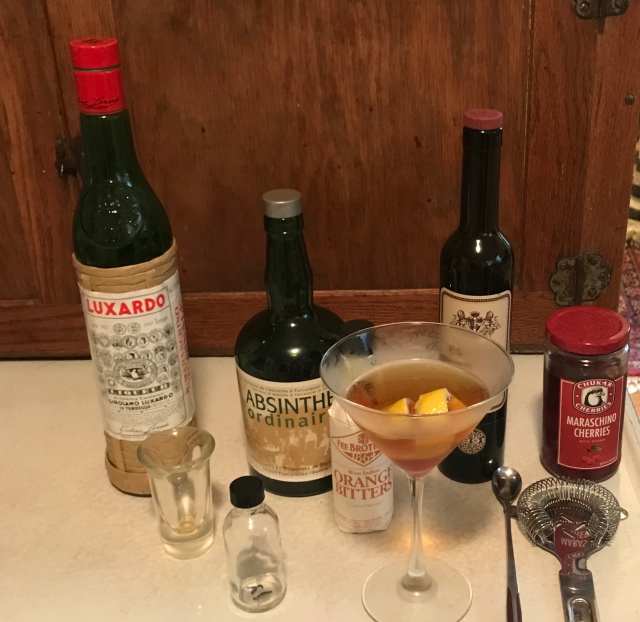 For dinner I made a version of the Veal and Ham Pie.  I had purchased a meat pie pan from Amazon, but when it arrived it was way too small.  So I ended up using a loaf pan.  This pastry had flour, butter, salt, egg and water.  Here it is rolled out onto the loaf pan. 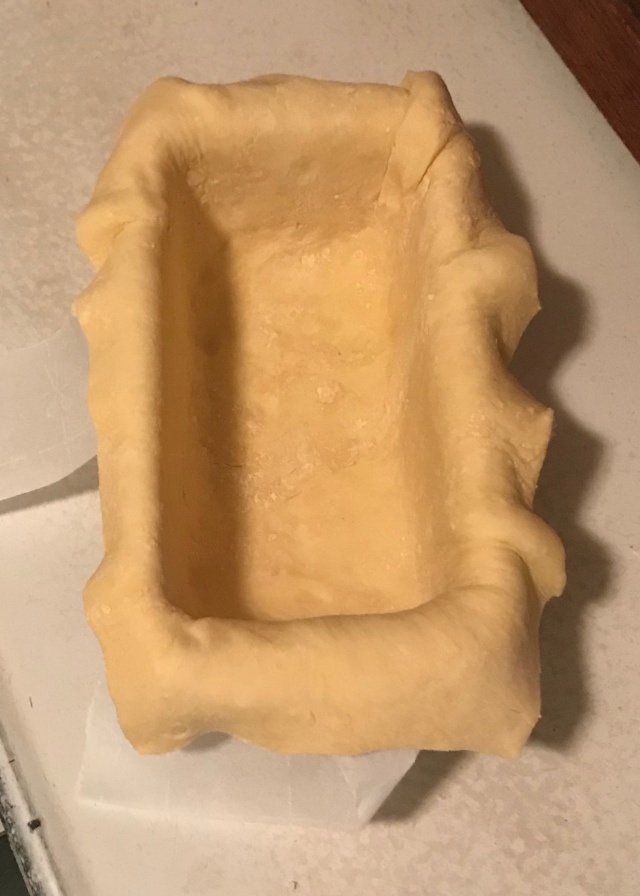 By the way, this recipe took a while.  So I listened to Tom Morton’s Special 2-hour Up Helly Aa Beatcroft Social .  One of my favorite songs from this is Seven Nation Army by SKÁLD  This music about Vikings and fire was amazing and really helped me during this cooking.  As an aside, the AC/DC song Houses on Fire was being played by AC/DC in Tom’s youth when a flare shot up and caught the Tacoma Dome’s ceiling on fire.

Here is the pie with half of the meat mixture (for me hamburger, pork sausage, bacon, egg, brandy, black pepper, cayenne pepper, and nutmeg).  I lined up 4 hard boiled eggs down the middle.

I added the rest of the meat mixture (all from our farm) and added the top crust.

Here is the side view with the parchment paper strips that will be used to life the pie out when it is done. 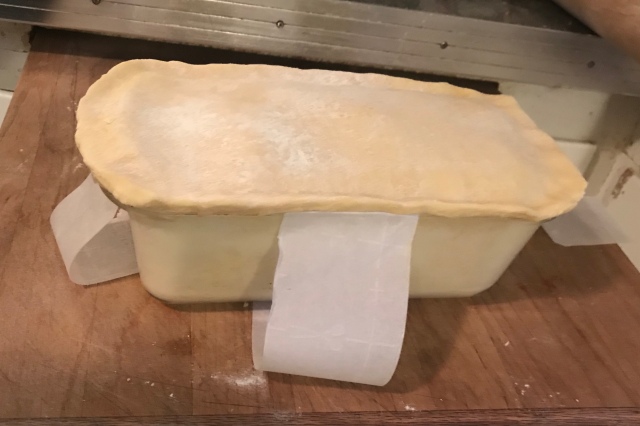 I added a pastry chimney in the middle and two pie vents that I rarely get to use. 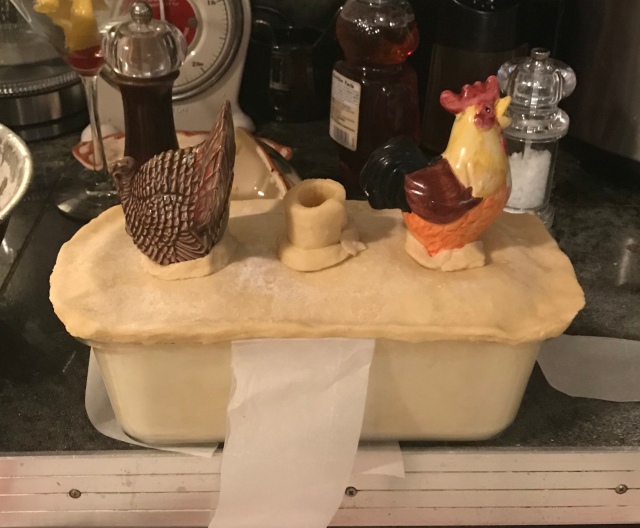 Here it is all cooked up. 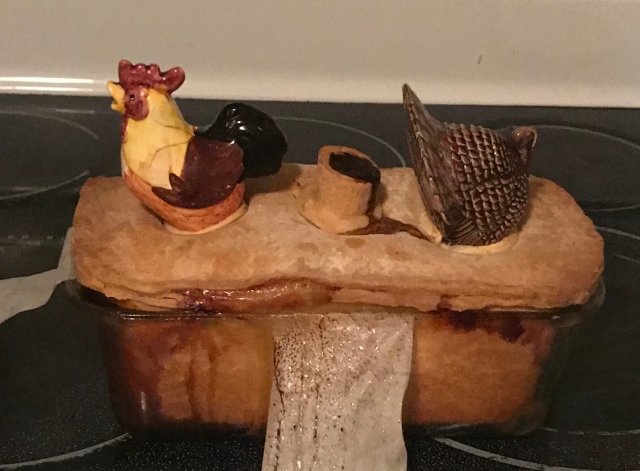 I had lots of extra dough so I put pieces in my barnyard mold to make sheep, pigs, cows, ducks, chickens and barns. 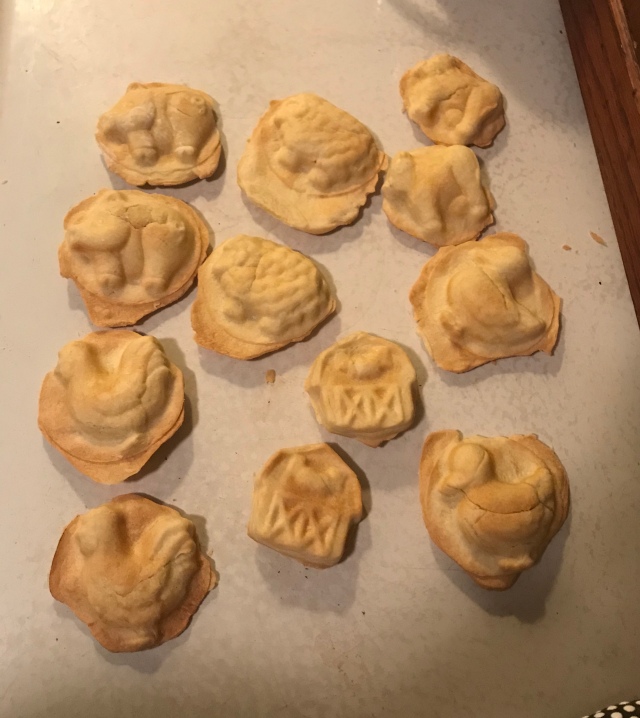 I trimmed these up using the Swedish bread board I received for Christmas to catch the crumbs.

I laid them around the pie on the platter. 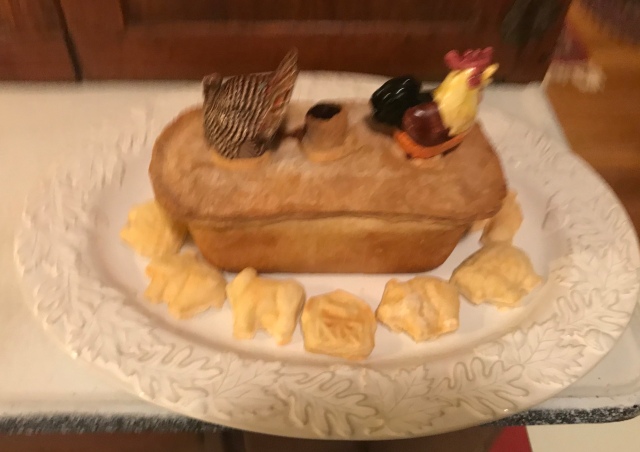 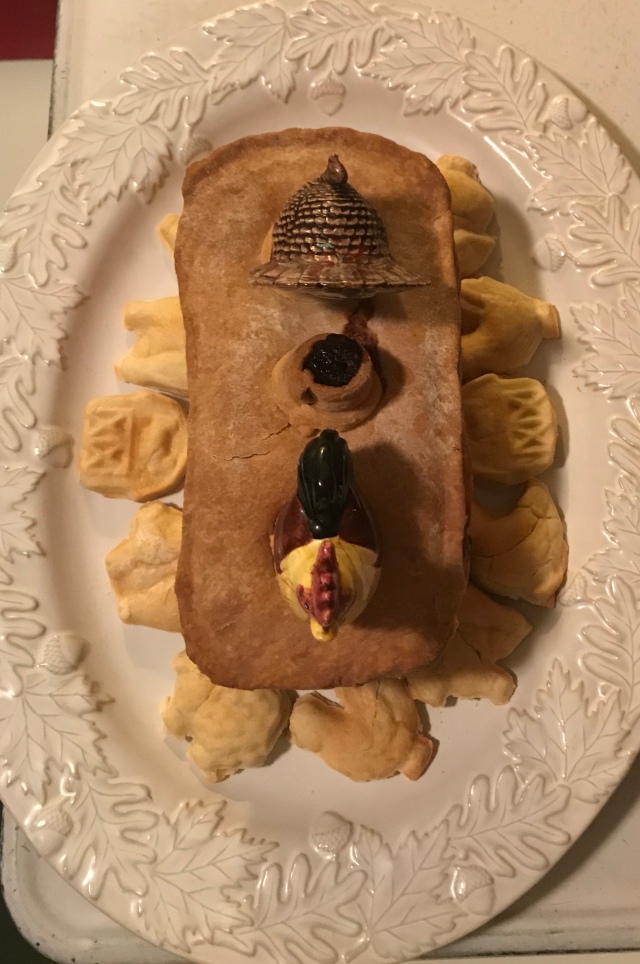 Here is my slice of the pie with our peas on the side.

This pie was really good and even Tom liked it (after he removed his piece of egg).  I will make this again someday but would really like a real meat pie pan to make it in.

That is it for part 2.  I will keep going as there are more recipes I want to try.  I even had a dream I was in a Downton Abbey-like home last night.  I guess I am getting immersed.

This entry was posted in Historic recipes, Recipes- farm. Bookmark the permalink.